[ Instrument Network Instrument R & D ] Recently, a number of user experimental results based on multi-function reflection spectrometer (MR) research have been published. MR, as one of the three spectrometers in the first phase of China's spalled neutron source (CSNS) construction and has been opened, is an important method to study the structure of thin film materials and magnetic structure.

Polarized neutron reflection spectrum of GGG / YIG / Pt thin film
In September 2018, CSNS opened for operation. Spectroscopy scientist Zhu Tao and other researchers have used CSNS as a platform to carefully organize and complete a number of user experiments. The research areas include spintronics, multi-iron oxide thin films, and organic solar thin film batteries. Six user experiments have been published, of which six have been published. Four articles use polarization neutron reflection technology (PNR), and the results are faster than other spectrometers in the same period of other spalling neutron sources.
PNR makes full use of the characteristics of neutrons with magnetic moment. It is the most important function of MR to study the magnetic properties of thin films, especially the magnetic properties of oxide films with complex magnetic structures. Researcher Cai Jianwang's research group at the Institute of Physics of the Chinese Academy of Sciences relies on MR to study the process and related magnetic structure of yttrium iron garnet (YIG) films prepared by magnetron sputtering, and the interface of the YIG films of off-axis magnetron sputtering was found by PNR measurement The transition layer is less than 2nm, and the entire film has the same magnetic properties as the bulk, and is uniformly distributed, which lays the foundation for the further study of the spin Seebeck effect and the spin Hall effect of related films. The work was recently published in Applied Physics Letters, a well-known journal in the field of applied physics.
In addition, related papers of the research group of the researcher Li Jiangyu of Shenzhen Academy of Advanced Sciences, Chinese Academy of Sciences
Large-scale Multiferroic Complex Oxide Epitaxy with Magnetically Switched Polarization Enabled by Solution Processing has also recently been published online in the internationally renowned comprehensive journal National Science Review. Researcher Li Jiangyu's research group has long been engaged in the research of high-quality epitaxial thin film growth technology for complex oxide films with adjustable composition and structure. The research team prepared a BTFM-CTO system room temperature multiiron epitaxial film by solution method, and passed STEM and PFM. , SHG and other methods have proved its strong spontaneous iron electrodeization at room temperature, and observed the phenomenon of magnetotropic polarization inversion at room temperature, but it is not clear how much room temperature magnetism. The research group confirmed that it has room temperature weak ferromagnetism by using PNR, and determined that its upper limit is 0.07 Â± 0.035mB / Fe, which provides an important reference for how to further improve the room temperature magnetism of this series of films. 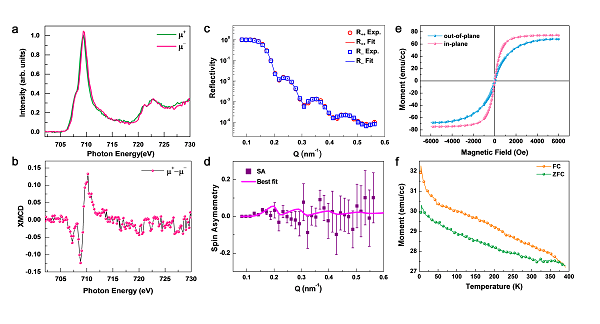 Magnetic Characterization of BTFM-CTO Room Temperature Multiferroic Film
In recent years, with the successful application of the most important polarization neutron reflection function of MR, a number of user papers using polarization neutron reflection technology have been published one after another. CSNS has now developed into an important research method for domestic magnetic research.