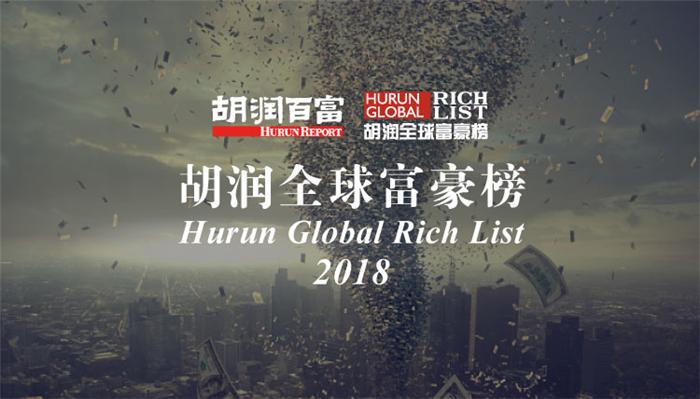 According to statistics, China adds four billion U.S. billionaires each week, and 2,694 billion U.S. billionaires are on the list, adding 437 people, reaching a record high, with total wealth of 66 trillion yuan, up 31%, equivalent to 13.2% of global GDP. . Amazonâ€™s 54-year-old Jeff Bezosâ€™ wealth increased by 71% to become the world's richest man with 750 billion yuan. The number of billionaires in Greater China increased by 210 to 819, which is 40% more than in the United States. The top ten in Greater China are all in the top 50 globally. Ma Huateng officially became the richest man in the world with 295 billion yuan, followed by Xu Jiayin and Li Ka-shing dropped to sixth place.

Driven by the development of the Internet ecology, a group of technology companies also announced their entry into the automotive industry. From the global perspective of the entire automotive industry, mobile travel, new energy, and autonomous driving have gradually become new ways to create wealth. In the area of â€‹â€‹sharing economy, Cheng Wei of Didi is catching up with Travis Kalanick of Uber, but Kalaninick also left Uber for a variety of reasons. The successful launch of the Falcon heavy rockets also resulted in the value of Muskâ€™s Space X company reaching 21 billion U.S. dollars, and Teslaâ€™s leading position in the global new energy market prompted Muskner to rank 40th in the world with 150 billion in wealth. , ranked first in the global automotive industry list. In addition, driven by Baidu and other internet companies, China is also leading the brand of driverless cars, and Baidu's Li Yanhong and Ma Dongmin are among the world's 54th with a wealth of 125 billion.

From the perspective of the entire automotive industry, the number of rich people and families in the world reached 99, including 40 from Greater China. In terms of the Chinese auto industry, Geely Li Shufu and Li Xingxing are ranked first in the auto industry in China, ranking 73rd in the world, totaling RMB 110 billion. Great Wall Motorâ€™s Wei Jianjun and Han Xuejuanâ€™s couple, BYDâ€™s Wang Chuanfu, Lifanâ€™s Yin Mingshan family, and BYDâ€™s Xia Zuoquan were all on the list. Lu Guanqiu, the former chairman of Zhejiang Wanxiang Group, died in October of last year. His son Lu Weiding was ranked second this year and ranked second in China's auto industry with an asset of RMB 50 billion. Sun Guangxin, chairman of Guanghui Group, ranks fourth in China's auto industry with a fortune of 45 billion. 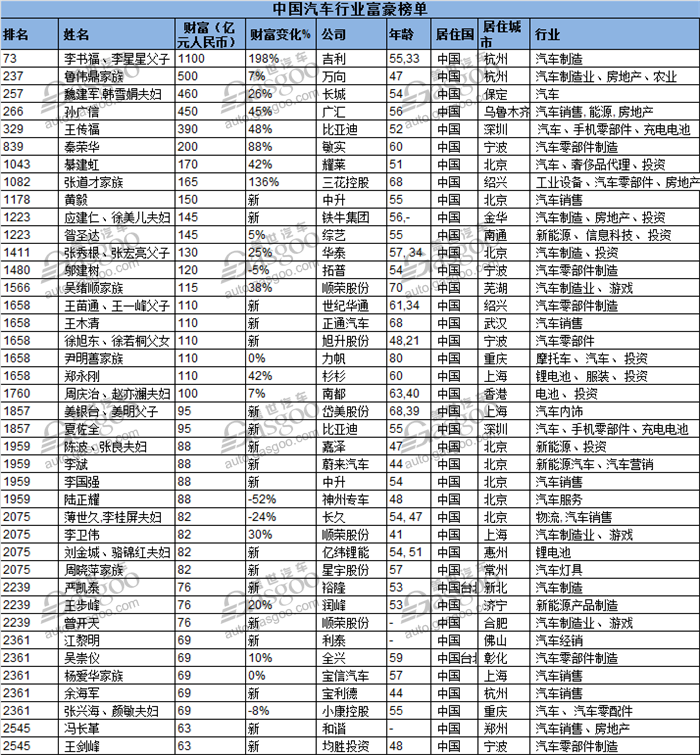 It is worth mentioning that 44-year-old Li Bin entered the 2018 Hoogewerf world's richest list with a wealth of 8.8 billion yuan, ranking 1959. At present, Li Bin's focus is on the smart electric car Weilai. In December last year, the launch of Weilai ES8 in Beijing opened a new milestone for Weilai. At the same time, Weilai has reached strategic cooperation with Jingdong and Shunfeng to provide â€œExpress to Carâ€ services for users. Jia Yueting, a 45-year-old who has not been on the list, has suffered almost all of his asset assets being frozen by the judiciary due to problems with LeTVâ€™s funds. In January of this year, LeTV experienced 11 consecutive low limit after resumption of trading. Although the two trading days that began in the Year of the Dog rose by 9.95% and 8.85% respectively, the shares held by Jia Yueting had been closed, but could not be processed due to the waiting for the freeze. . Regarding when Jia will return to China, how to fulfill his debt obligations has always been the focus of public discussion.

Hu Run, chairman and chief researcher of Hurun Report, stated: â€œThe prosperity of Chinaâ€™s economy, the weaker US dollar, and the USâ€™s tax cuts prompted the number of billionaires to break new records. China is experiencing an amazing period of time. During the startup period, 210 billion billionaires were added in the past year."